As Americans in the west woke up to the awful news from Florida, I was on my way to the Ben Avery shooting range in the desert north of Phoenix Arizona, to meet three gun enthusiasts – Carol Ruh, president of the Arizona Ladies Shooting Association, her husband Pete Ruh, and the group’s Treasurer Debbie Arnold.  I’m recording a documentary for BBC Radio to air this September. The brief is, “what do Americans really think?”

Carol Ruh teaches gun safety. She’s a licensed instructor. She’d brought a selection to show me from her collection of nearly fifty weapons, including exactly the type of firearm that was used in the Pulse nightclub, the AR15 semi automatic rifle. 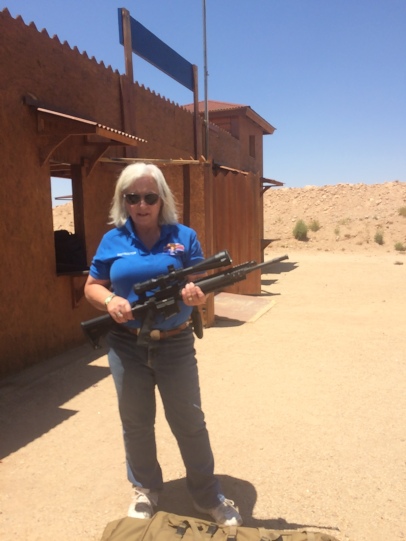 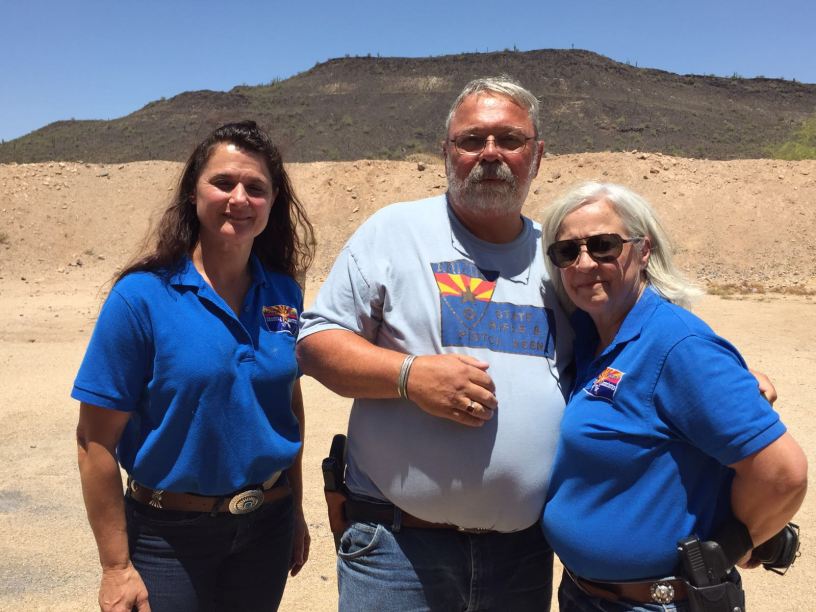 Carol bought it to take part in an Arizona state competition that involves target shooting at 200 yards. “It’s just like buying a new pair of shoes – I wanted to add it to my collection. I love it”.

For Carol, the answer to the Orlando shooting is not to ban such weapons. She and her husband Pete Ruh both wanted me to hear again a line that I have heard over twenty years from many American gun rights advocates: “It’s not the gun that kills. It’s the person behind it”. Pete was also very clear about this : “if any of us had been in the nightclub that night, this would not have happened”.

Carol told me that if she finds herself in such a horrific situation, legally carrying her own gun, she is prepared to kill the attacker. Her reaction to the Orlando attack? “If there were no police inside, no SWAT team, I might have taken the shot. It’s a difficult thing to do. It’s not something I would wish to do. But if I had a clean shot, I might have taken it.”

These three Americans have decades of legal gun ownership and experience between them.

So what do they think can be done to stop more mass shootings?

There are also sales loopholes to be tightened. Carol said “straw purchases” are still a real problem, where a front person purchases the gun, purely in order to pass it on.

Carole adds that “the secret to all of it is education. She believes proper safety training should be compulsory for those who buy guns, “just like a driving test”.

And Debbie Arnold wants the government to “stiffen up” the laws on gun crime. She worries every day about her 23 year old son, a police officer who could one day be in the line of fire. She got tearful telling me about the threats he faces. She is angry at the Obama administration for what she sees as a failure to crack down hard on illegal gun ownership. “The criminals, the felons, will always get the weapons. The rules should be about checking the people who aren’t meant to have the firearms”.

But what if an attacker DOES have a legal right to his semi-automatic rifle?

Even then, the answer from this Arizona gun range today is definitely NOT to ban the weapon itself.

Carol Ruh believes President Obama – and maybe Hillary Clinton after him – want to tear guns away from their rightful owners, from right-thinking Americans. “They’re trying to rip the constitution down, destroy our constitution”. Debbie Arnold believes “she’s already told everybody the Second Amendment will be abolished”.

I ask Carol what she will do if the government tries to limit guns to ranges, or stop citizens from carrying them. “I would resist that to my dying breath”.

And Carol concludes: “This is not a country that will be invaded. Because the common person owns a firearm, the majority of us do”.

I've been a BBC newswoman for 30 years: reporting from around the world. Currently to be seen anchoring BBC World News TV. Main interests - politics, psychology, reading, trekking, and all things American. I began this personal blog as a 2011 Nieman Journalism Fellow at Harvard. You can also find me talking daily news on Twitter at @PhilippaBBC, coaching @positivecoachi3, and life & travel on Instagram at @philippanews. Thanks for reading!

One thought on “America Revisited: the case for Gun Rights”

This site uses Akismet to reduce spam. Learn how your comment data is processed.

Have questions about coaching?